“No visit to the motel can start before you force yourself to go into the highly triggering, and terrifying clown museum … ”

The tiny desert town of Tonopah was once known as the mining capital of the US, and during the height of the gold rush was one of the country’s most prosperous mining camps.
Today it’s inhabited by only 2500 people, and is just as well known for its ghostly inhabitants as its mining past. Oh, and, of course, for the World Famous Clown Motel.
This place is next level everything. Although Tonopah was never fully deserted and therefore not officially a ghost town, it seems to have well and truly earned the title now.  Maybe it was the deaths of so many miners back in the day, or maybe it’s because it has one of the darkest nighttime skies in the country … either way, this place be haunted.
If the spirits at the Clown Motel aren’t enough to freak you out, then step next door to the very haunted Old Tonopah Cemetery. More than 300 people are buried here dating back to 1901, including the Marojevech Brothers who died in an horrific mining accident in 1907; the cursed Merten brothers, and Sheriff Tom Logan, a lawman who was shot by an unruly gambler in 1906. 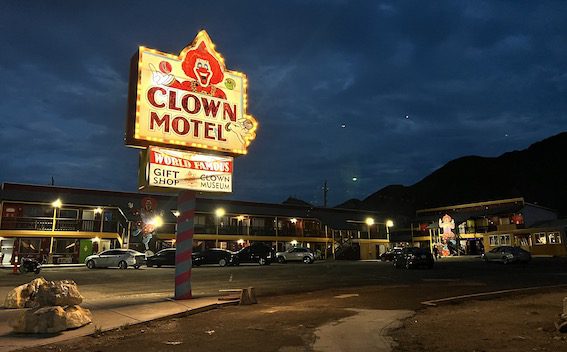 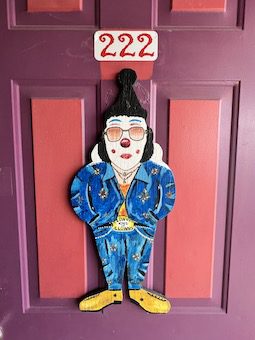 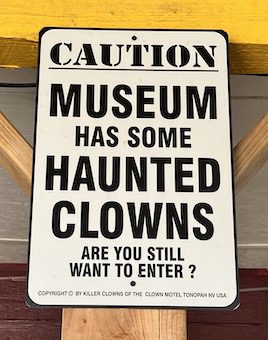 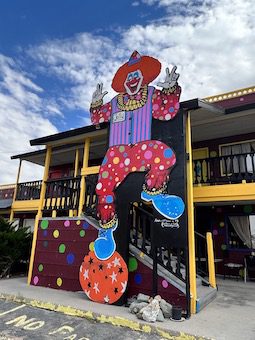 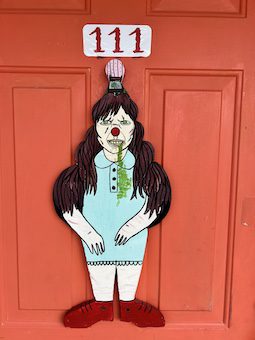 We’re here for the boos … from Jolly and friends

After seeing the Clown Motel featured by some of my favourite paranormal investigators, I HAD to visit. Luckily I had some time between conventions, so jumped in the car, and drove into the desert — and 38-42 degree heat — to get to Tonopah. And I was not disappointed.

Motel owner Vijay Mehar found the motel, located pretty much in the middle of the desert, with the vision to turn it into a real experience for visitors. He succeeded. It’s creepy AF.
Vijay was fascinated by clowns and the circus, so when the opportunity came up to buy the motel, he didn’t hesitate.

“I alwasy loved the circus and clowns, and I painted most of the clown portraits in the motel,” he told Halloween.

Vijay has also given some of the rooms a Hollywood makeover … of sorts. He’s created a series of rooms based on horror movie icons … there’s IT, Halloween, Friday the 13th and The Exorcist themed rooms. And if that isn’t terrifying enough, he’s ALSO  came up with Jolly the clown as his brand ambassador, and two huge 19ft cutouts of the red-nosed freak adorn each end of the building. He’s EVERYWHERE and he sees ALL.

Staying in the ClownVis room – a wonderfully creepy nod to YouTube performer ClownVis Presley, it featured a large king bed, with all the comforts you could need. Oh and then there’s the artwork. Vijay painted the artworks in my room, and they’re just brilliant. 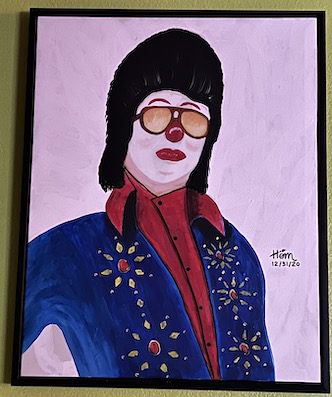 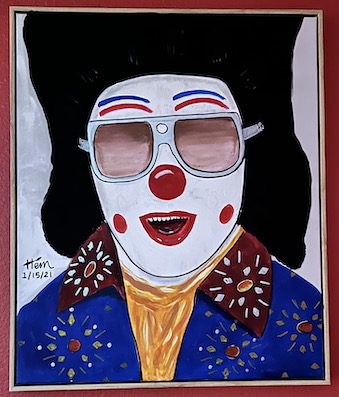 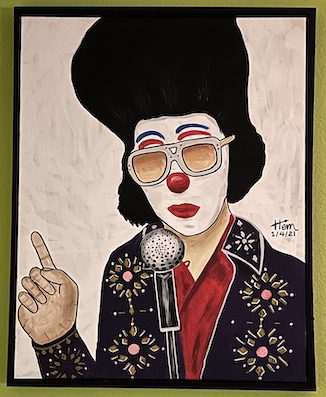 A museum of horrors

No visit to the motel can start before you force yourself to go into the highly triggering, and terrifying clown museum. This place is horrific. Clowns everywhere, and if you have a touch of coulrophobia, like I do, then it’s gonna be a quick but worthwhile visit. What doesn’t kill you …..

Vijay said around 150 of the clowns in the clown museum were from his personal collection, and the remaining 2950 have been donated.

Some have  known ‘attachments’ and others have nervously written warning labels stuck on them by those relieved enough to have found somewhere to offload them.  Some move without any reason for them to do so, some make sounds without any batteries installed and others just give you the evil eye, daring you to stay longer or come closer. I’ve been to some terrifying places in my life, but this, THIS, was next level. 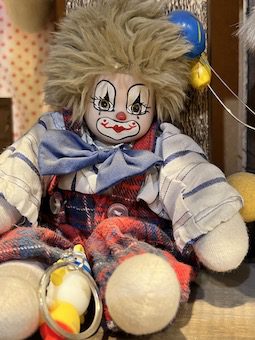 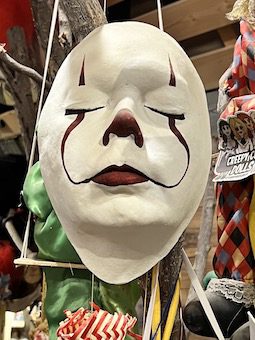 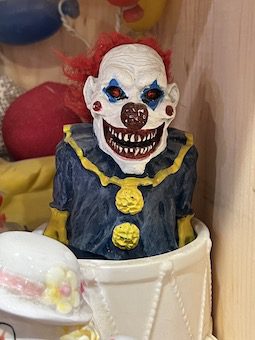 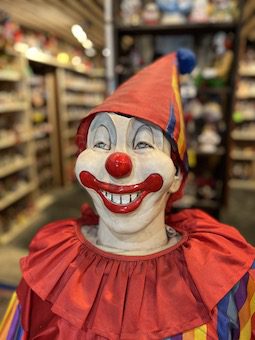 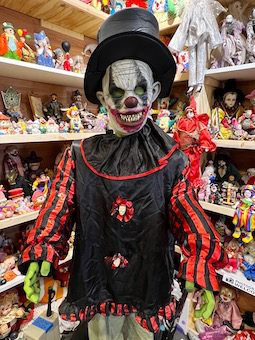 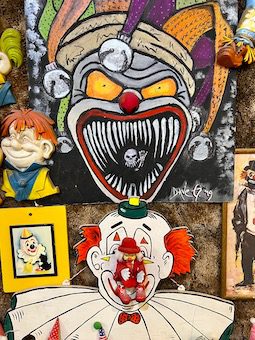 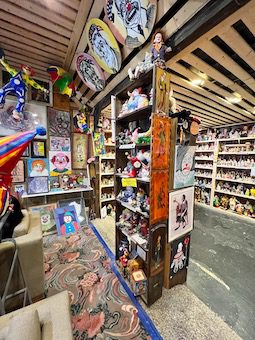 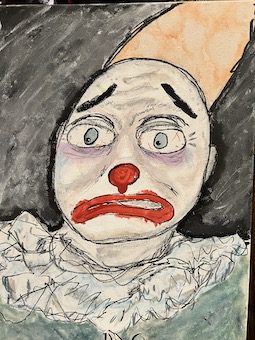 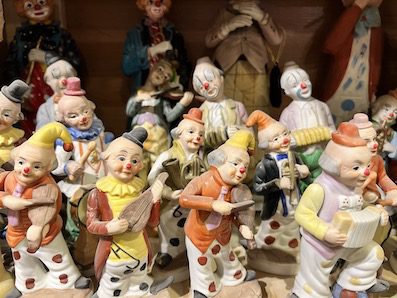 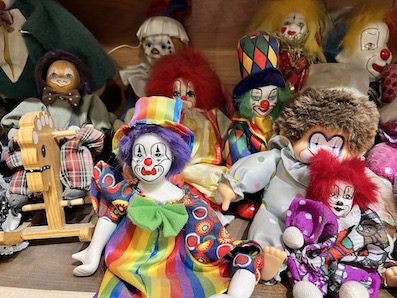 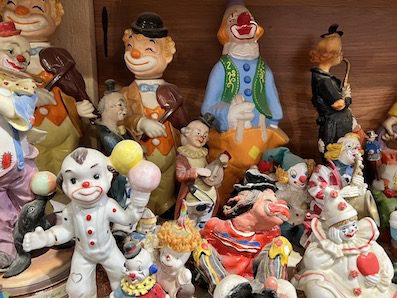 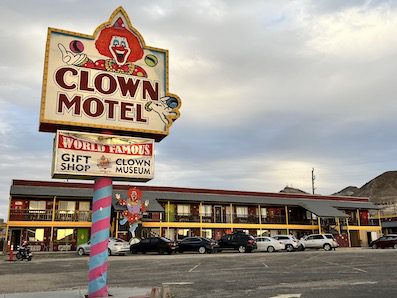 If you want to spend the night at the Clown Motel, good luck to you!  You can check out the rates and rooms available on the motel’s website, and don’t say we didn’t warn you …  https://www.theclownmotelusa.com/

Don’t forget to grab your merch on the way out, although you’re not going to need a fridge magnet or t-shirt to remind you of your stay at this place. Those memories will NEVER LEAVE.

WORDS AND PHOTOS BY ANDREA BEATTIE

Andrea is the founder of Hallozween and a paranormal enthusiast who has visited locations all over the world.

WORDS AND PHOTOS BY ANDREA BEATTIE

Andrea is the founder of Hallozween and a paranormal enthusiast who has visited locations all over the world.